Envisioning a new approach and user experience of a beloved in-brand product, the Flickr Chrometab extension. 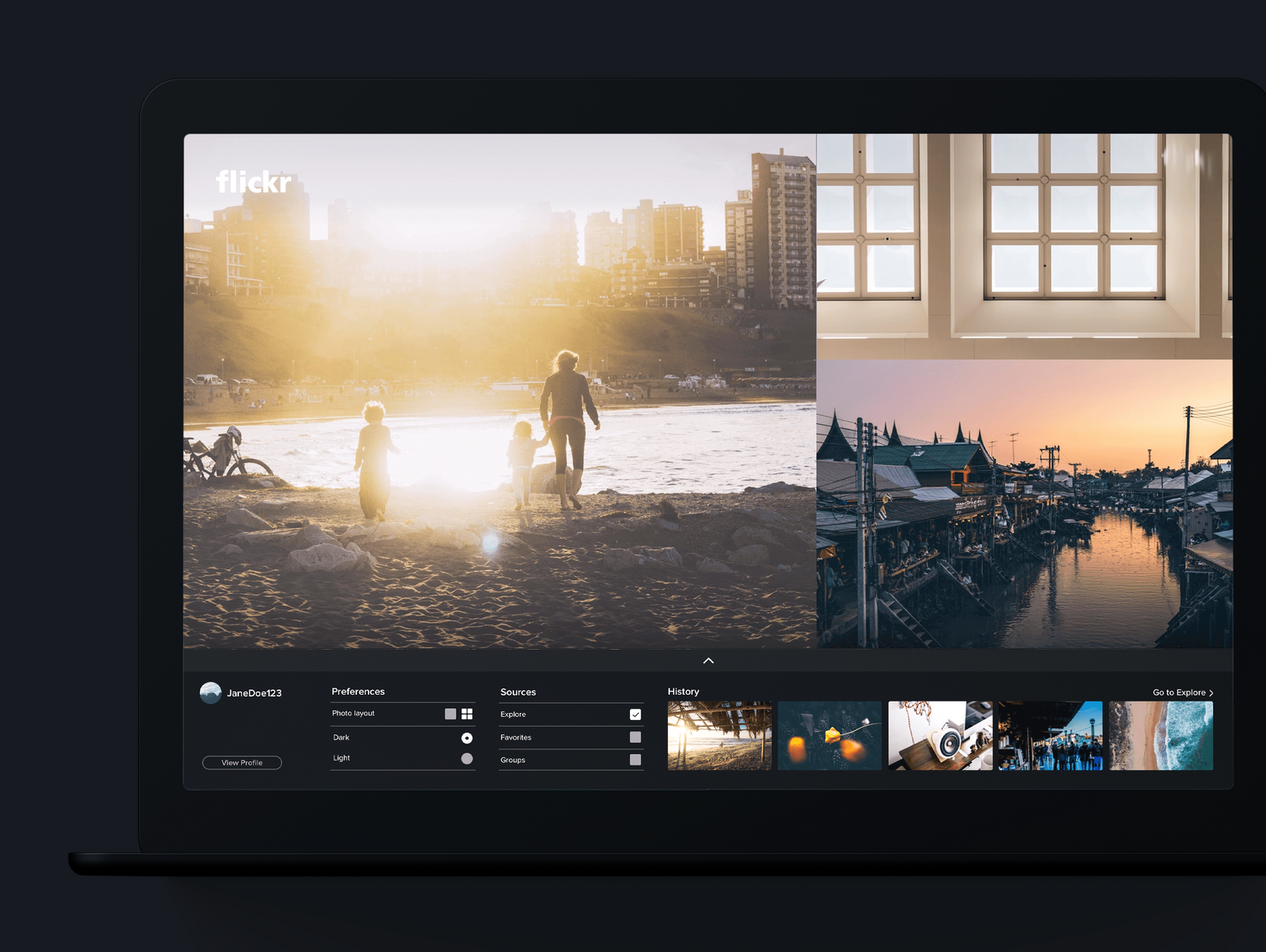 The chrometab is an extension of the Flickr platform

A new approach and look to the Flickr Chrometab, which generates a new photo from a Flickr photographer each time a Chrome tab is opened, done in partnership with the Flickr design team.

The Flickr Chrometab is an extension of the Flickr platform and in the past was outdated, slow to load a new photo and lacking an up-to-date experience. The project was aimed at overhauling the current design, to create a smaller product that was focused on Flickr photographers showing their photos and allowing current users to link their accounts.

Throughout the progression of the project, talking with current Flickr users to gather research and key project collaborators lead to creating a unique, clean and simple photo viewing experience for a Chrometab extension.

Goals of the redesign

Key goals of the product we're providing interaction with a photo, allowing to change preferences in how the photos were being displayed and logging in with a Flickr account. A key part of the Chrometab experience was showing high-quality images and having a viewing history of recent photos, from this users are able to favorite or share the photo. Once logged in through a Flickr account, users are able to change simple preferences such as a dark or light mode and sources of their photos within the platform.
‍
Another goal was what exact photos were being pulled from Flickr, to start with an approachable amount of settings photos were extracted from Flickr Explore, Favorites and Groups. Keeping the objectives in mind, a fist version of the Chrome extension was designed with minimal features.

Working with the research team and existing customers, a simple prototype of the design was created for user testing. Key positives of the test showed that users associated the Chrometab with logging into an account, liked the idea of preferences and sourcing the photos and the simple interaction of favoriting a photo. 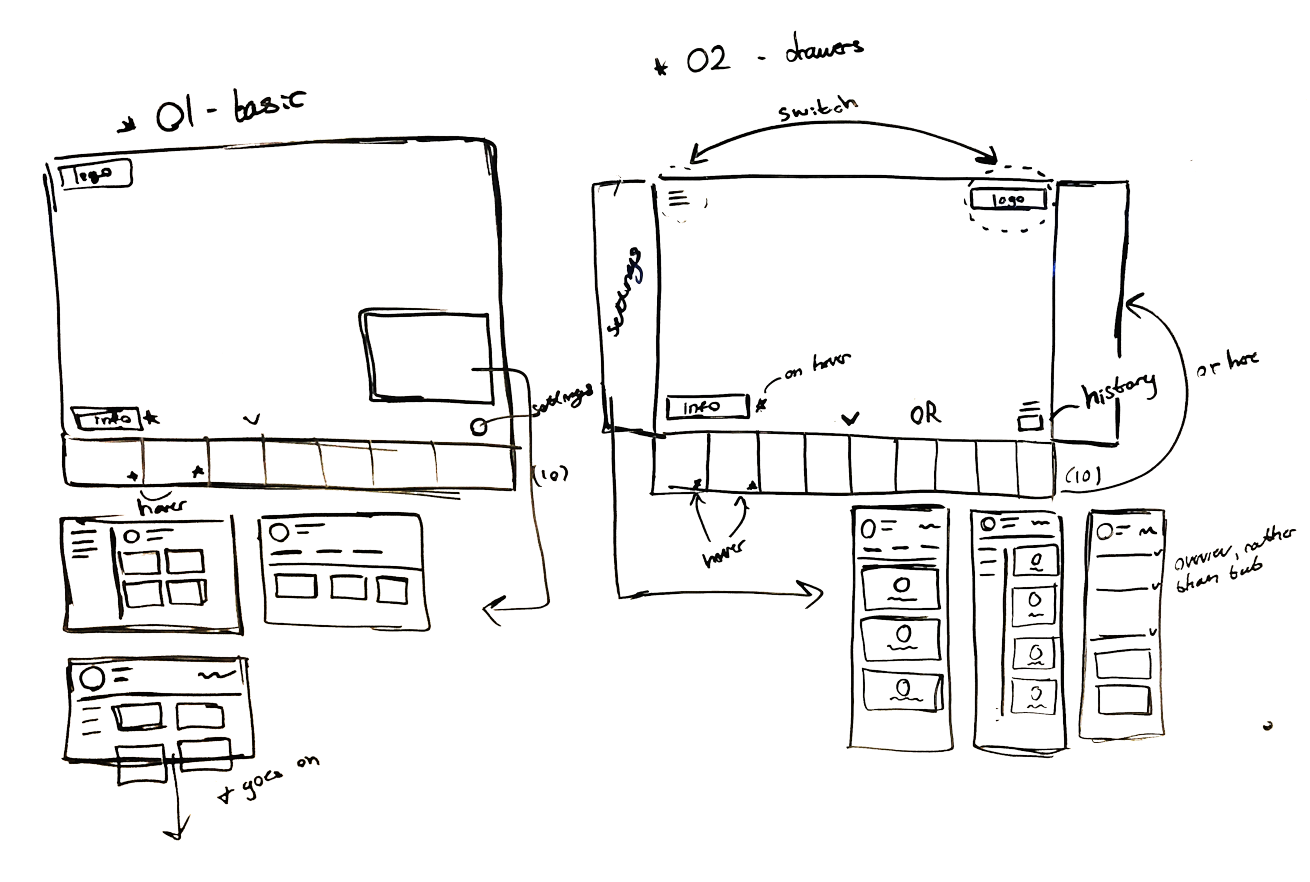 Areas that needed to be worked on in the second version of the design were improving the UX of the photo history, showing users that it was photos viewed in the past from opened tabs. Also, users expressed interest in showing their own photos in the tab, but this changes from the original concept of discovering new Flickr photographers from the Chrometab. The Chrometab enhances the viewing of new photos and photographers from the main Flickr platform, keeping the extension lightweight and practical to use on a web browser.

Establishing a set of features

Taking into consideration the user testing findings and user up-sells, a final version of the Flickr Chrometab was created and ready to be sent over to the development team.
‍
Starting from the beginning, once a user installed the Chrometab extension they are greeted with simple on-boarding tooltips and a slim bottom bar user interface. This draws their attention to what actions can be performed and abilities of the Chrometab, but doesn't take away from the photo viewing experience. 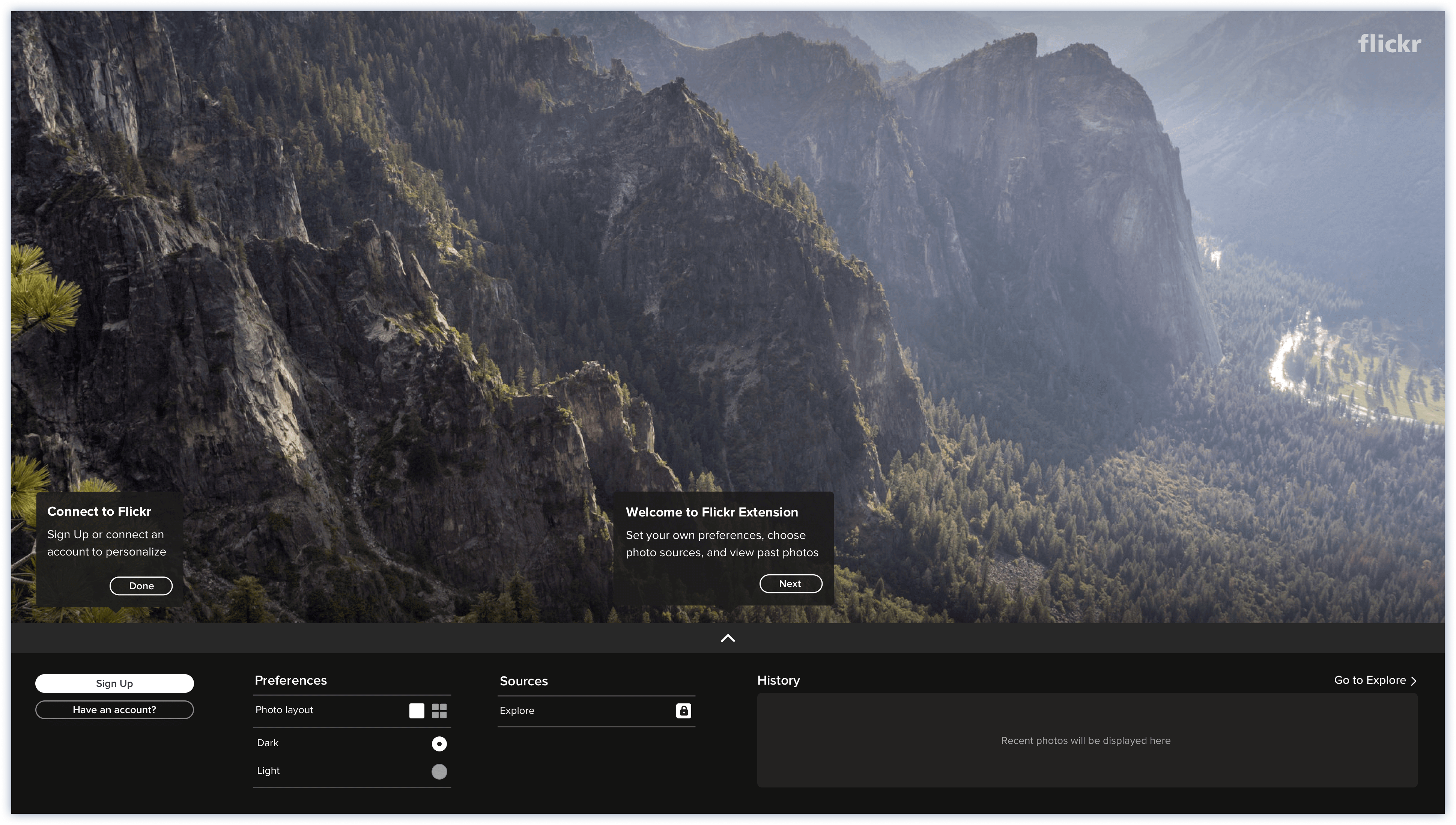 Once a user is logged in with a Flickr account, they are able to interact with high-quality photos pulled from Flickr. A new image is shown with a photographer's name and image title, allowing users to favorite or share a photo on social media by copying a link with set metadata in code. 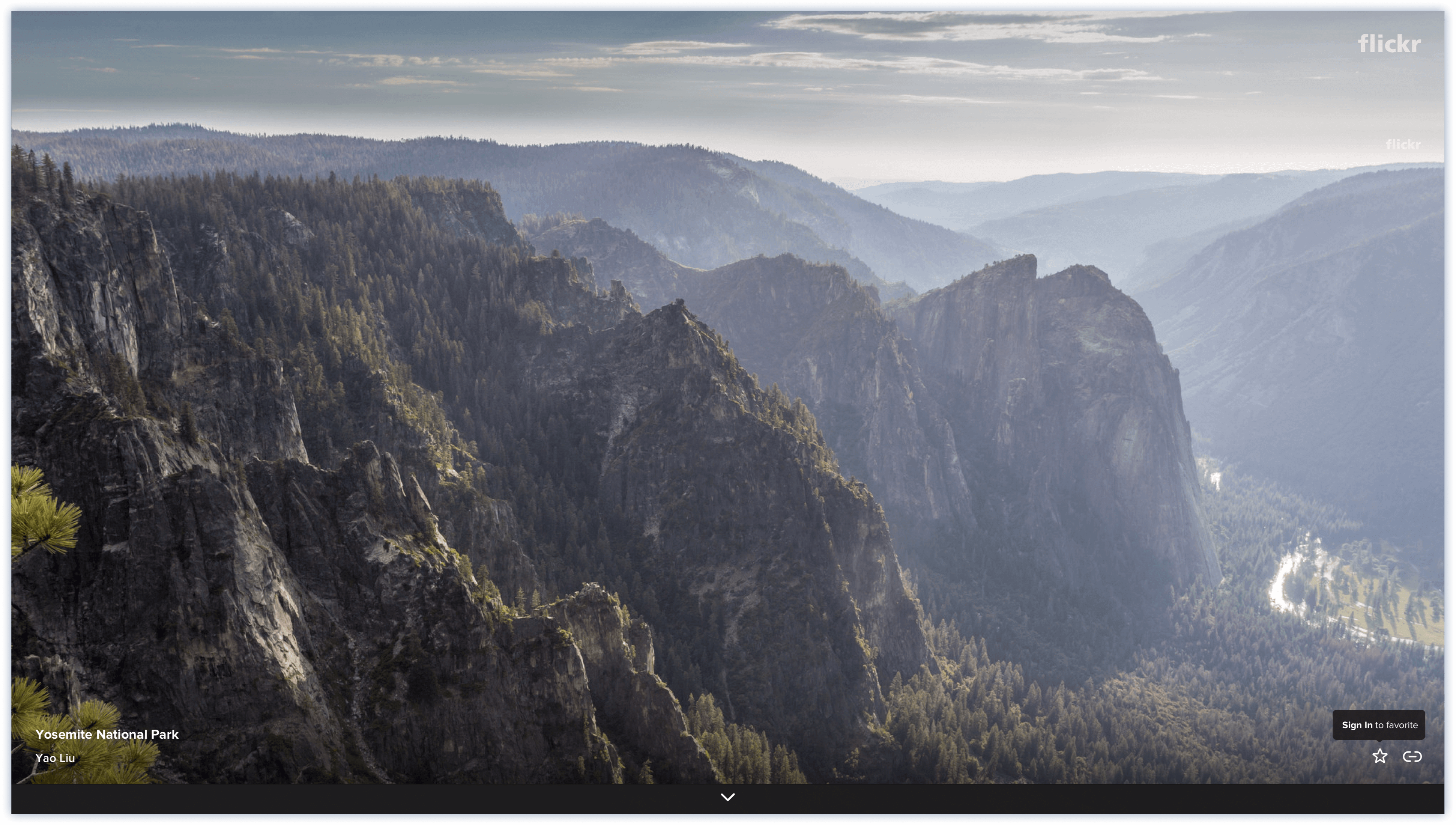 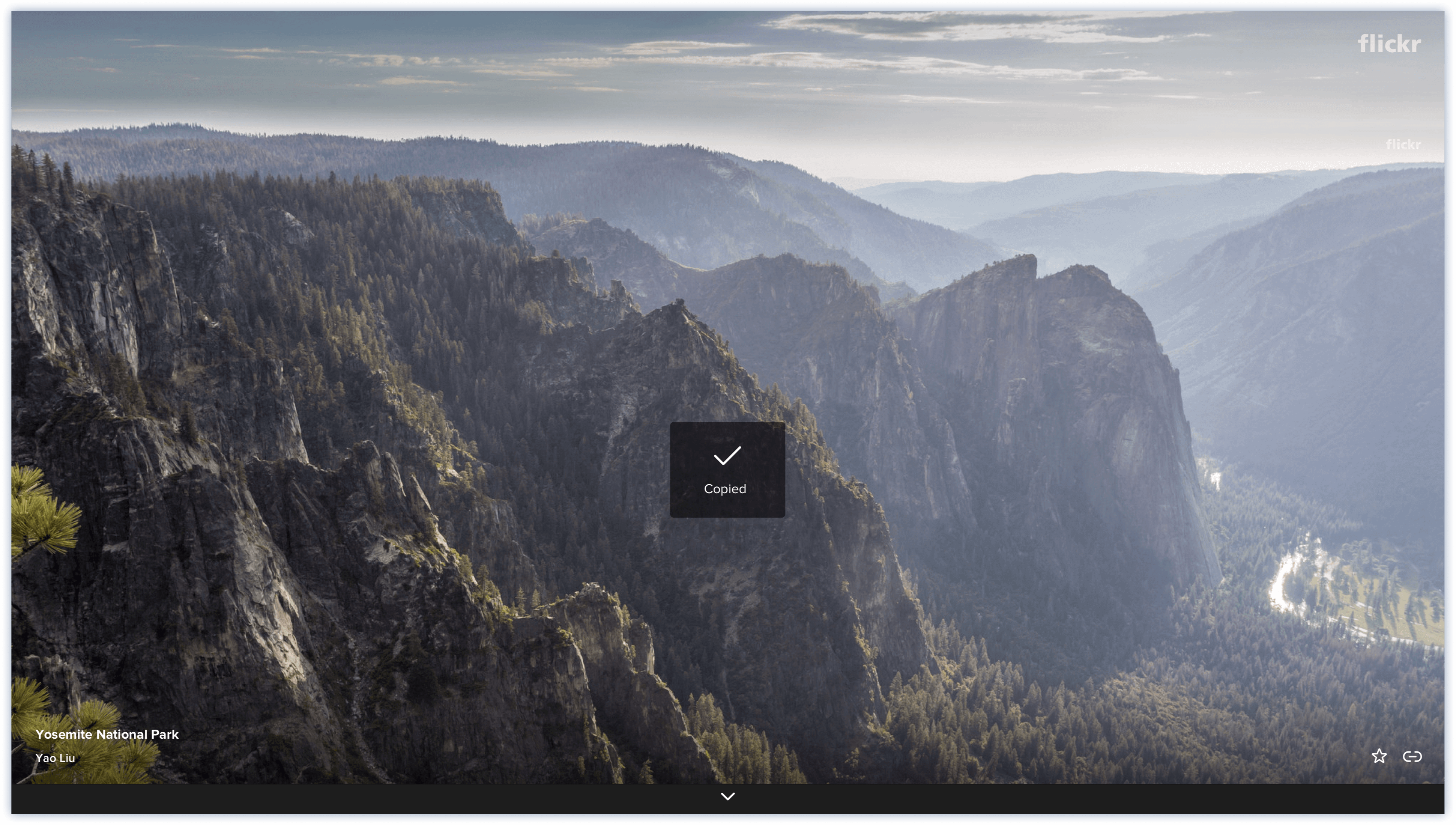 Customizing a viewing experience and discovering new photographers are key benefits of the Chrometab. Users are able to change their preferences of a dark or light mode within the interface. Also, users can set a source of where their photos come from, such as Flickr Explore, Favorites or Groups. 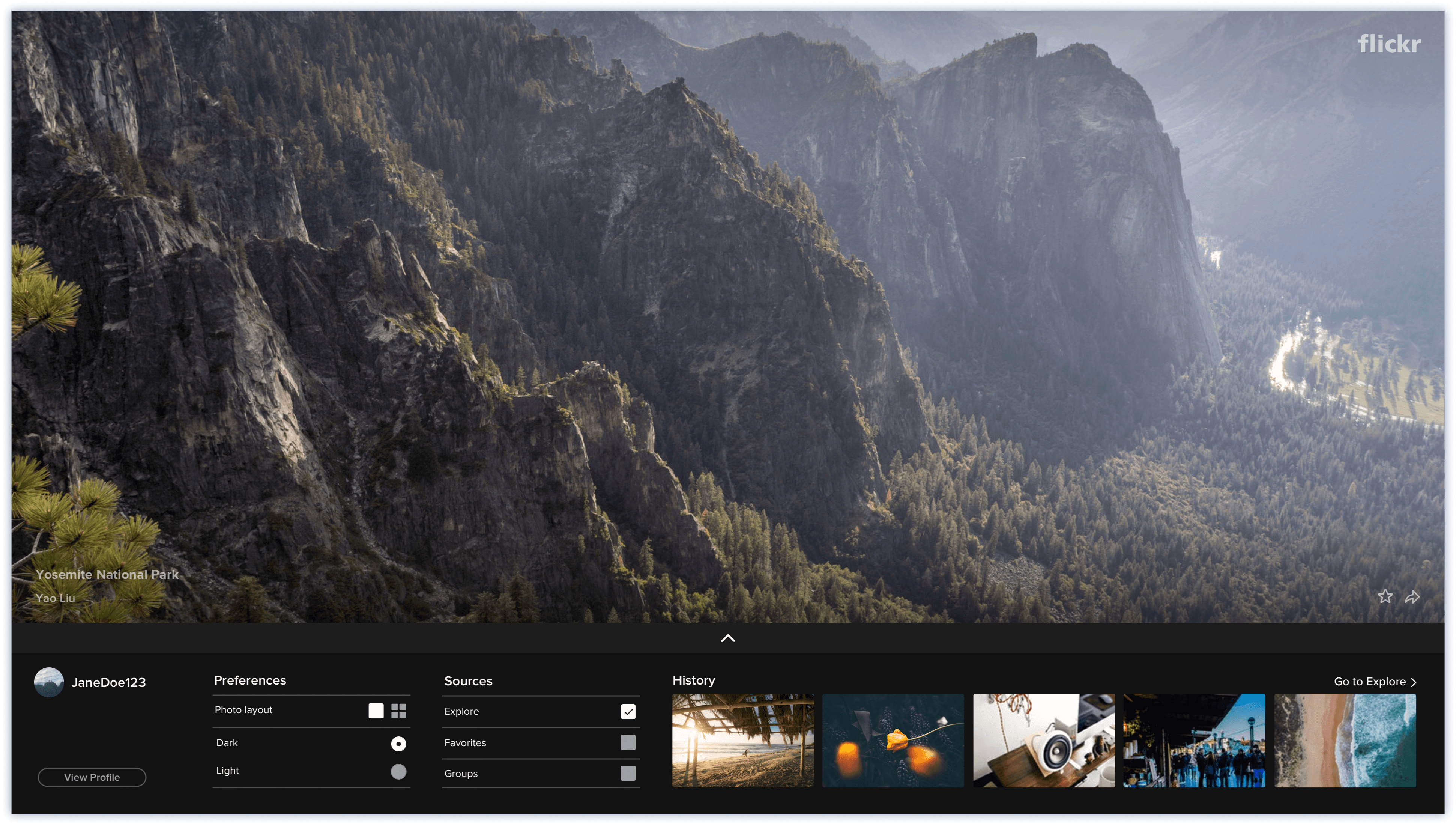 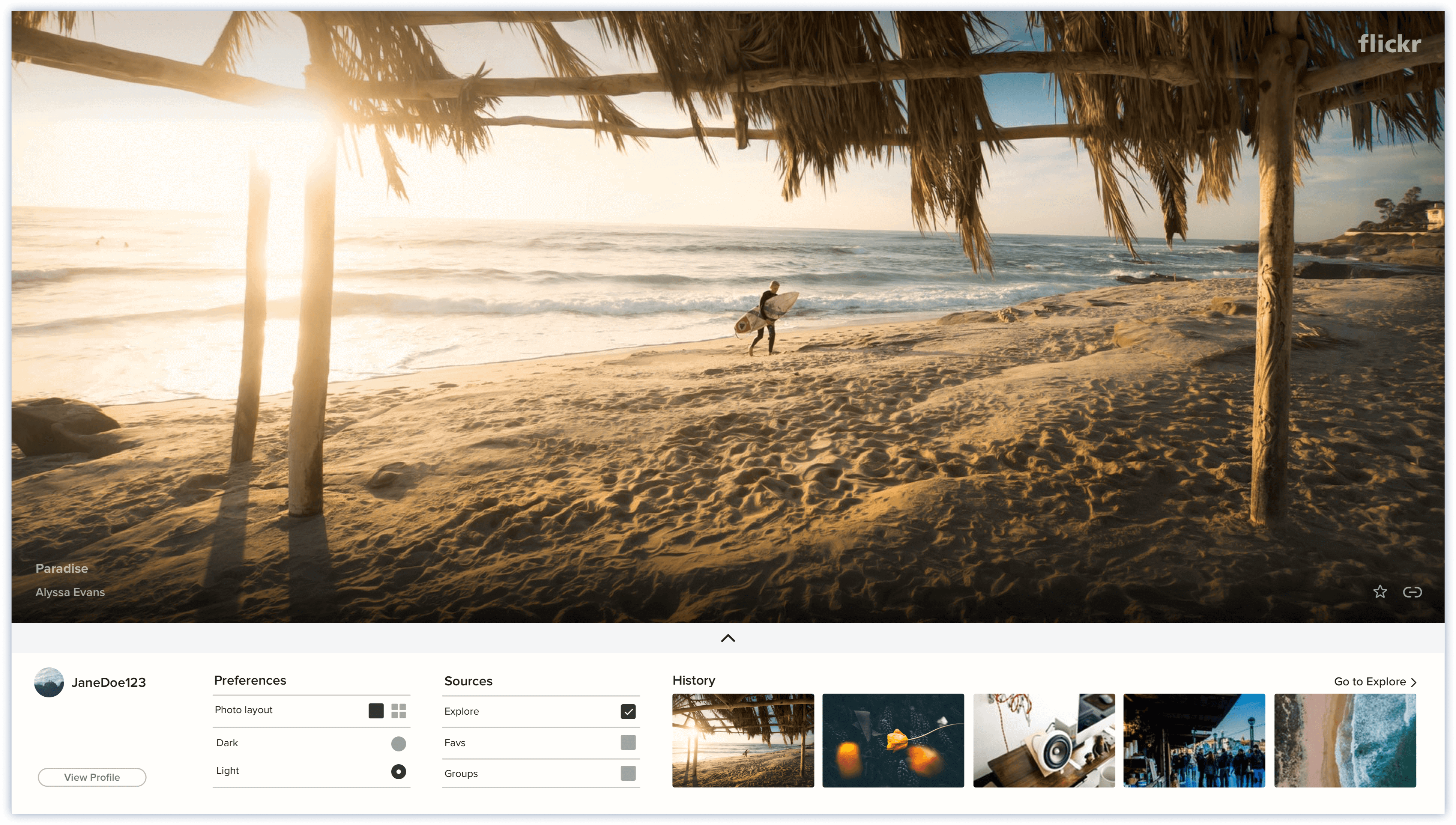 A final product and ready for launch

The final version of the Flickr Chrometab created an extension of the Flickr product line with an up-to-date sleek interface, promoted user interaction and discovery of photographers. Flickr received a final design file ready for development, upon handoff, it is expected to be pushed live to over 70,000 users. 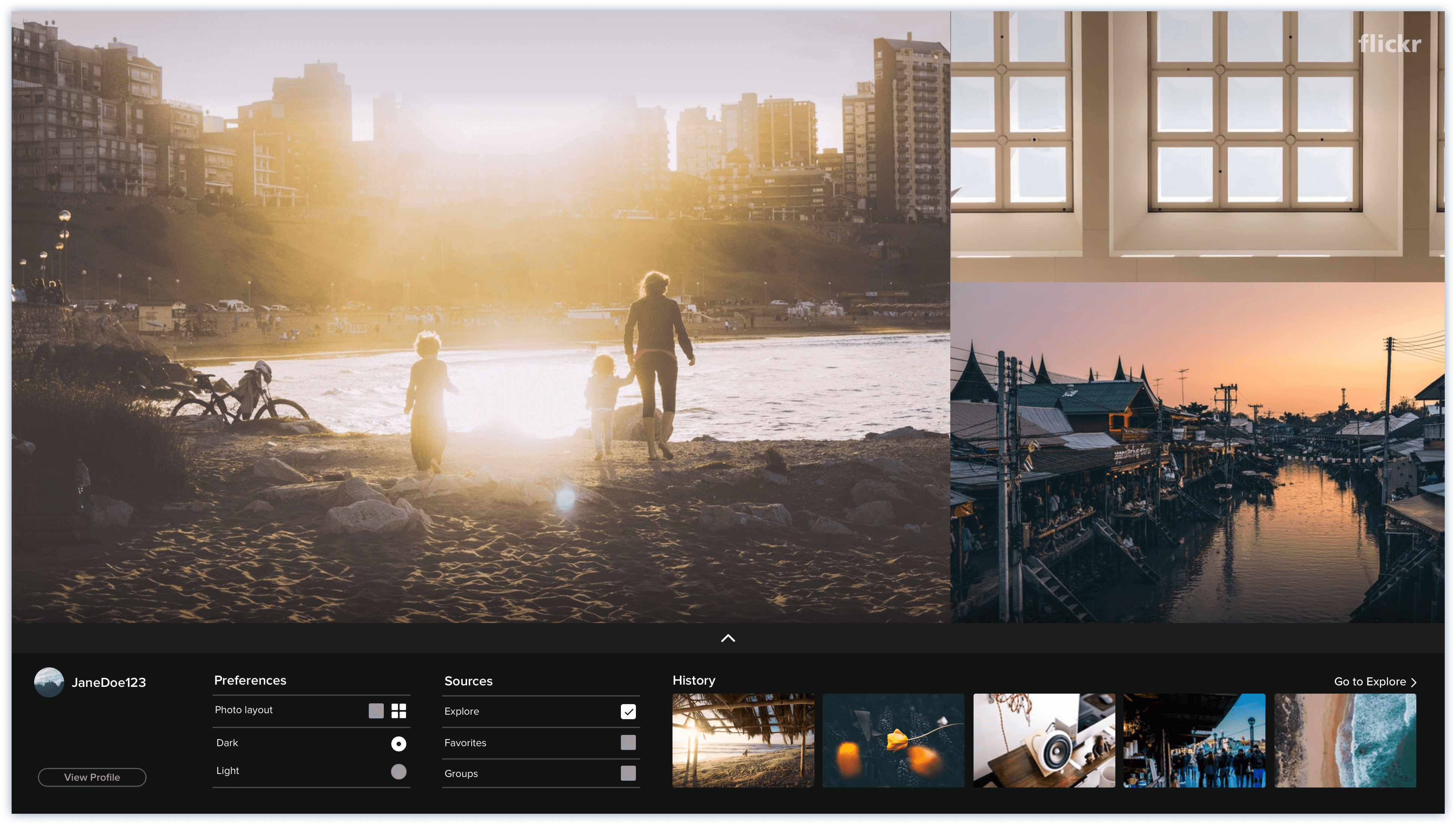 to complete the project

noted and ready for a developer team